Awais went to Egypt to work on one project, but by the end of it, he realised it had been two all along. Curious to find out more? Keep reading to get the background story

Coming from a small village near Faisalabad, growing up, I could never have imagined such an opportunity being available to me.  It was my first time abroad, and I didn’t know a single person in Egypt. Coming out of the Cairo airport, I can honestly say I felt scared. For a split second, I started questioning myself and wondering what exactly it was that I signed up for. My mind starting racing as all the possibilities of things that could go wrong flooded my conscious. The race my mind was running was stopped in its tracks as my eyes settled their gaze upon a person. He was wearing a big smile on his face and a holding big AIESEC sign in his hands. His kindness and friendly energy allowed for an immediate and necessary comfort to be felt as he took me to my accommodation.

The next day I had my first project meeting, where I, along with the other volunteers, met our project manager. He is, to this day, one of the nicest people I have ever had the pleasure of crossing paths with. He supported and helped me in every situation. And took it upon himself to help me with issues he was not directly responsible for solving, solely because he was dedicated to making my experience unforgettable.

My project, called Reform Egypt, was about working in a school in the city of Cairo.  The main goal was to create awareness among the children about different cultures and countries, another goal was to teach them English and ethics.

When I first met the kids in the school I saw hope in their eyes. Hope that through education they can find their way out of this place and be successful in the paths they choose for themselves. Everyone had a story and everyone had a dream. The best time I spent in Cairo was with the  kids. We taught the them some English and also about recycling. They were so happy and eager to learn that I wanted more than anything to stay there longer, but unfortunately, as they say, all good things come to an end.

The best moment in the entire trip for me was when on the last day i was sitting in the tuk-tuk leaving the school. As we started to drive away, the kids ran towards the slow moving tuk-tuk and shouted “Hey Awais! See you Later!”. 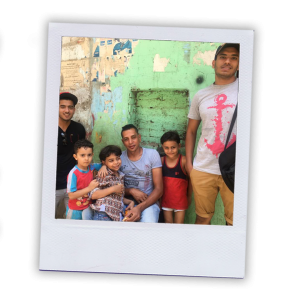 It was a simple moment…

and yet that for me was the proudest I have ever felt of myself. I felt that I have done something wonderful by coming here in this city. I felt proud that I taught something valuable. And in the end, also grateful, that I walked away with so much more than I even gave

Sometimes I feel like, on one hand, I was there to work on a project and from another perspective…

I feel that I myself was a project

Again, it was called, Reform Egypt. By definition, reform means “a transformation and renewal of existing social or political conditions to improve them.” I find it immensely symbolic, that not only did I contribute to reforming Egypt during my time there,

I was reformed, renewed, and improved.

From that point of view, I guess you could say I got two projects in one trip!