Time, indeed, IS up!

When I was little, I didn’t know much about what it meant to be harrassed. Sure, mama always said that no one but myself had the right to touch any part of my body. As I grew older, I realised that being harrassed is not just about someone violating your personal space, but also delivering unwanted and vulgar expressions often used as “compliments”. There are infinite examples I could give you, but I think you can already imagine. Instead, I’m going to tell you a story that has gotten me forcefully rallying against sexual assault and harassment. Thus, joining the movement.

A friend of mine stayed over at a friend’s house, it was supposed to be a gathering with friends (coed, being inclusive and all). However, too many people had come and were going to stay, and beds were lacking. She decided to share a bed with her best friends: coincidentally, a male and a female, staying in the middle so none of them would feel awkward. What happened the next morning she couldn’t have foreseen, but that was the worst experience of her life. She woke up to her so-called best friend groping her breasts and trying to fondle her, even though there was another individual with them. Scared out of her mind, she didn’t say a thing and let him get away with it. She fled the moment she had the chance, not even taking the time to shower or having breakfast.

When she got home, she received a message from him, telling her that they could talk about it. She agreed, but as soon as he started replying, she realised that he wasn’t going to apologize. Instead, he told her that they were both to blame, making her feel guilty for something she didn’t ask for. Why? Because that man wasn’t only an abuser, but he was also committed to a partner. The story didn’t end there, even though she wanted to, he had abused her psyche. Whenever they ran into each other, he felt the need to abuse her over and over again. Painfully as it was, she didn’t fight back, afraid of what might happened. He had planted the seed in her head that if she opened her mouth, she would be the one everyone would point at and shame. She felt ashamed, she couldn’t sleep without relieving the nightmare, but what hurt her the most was that she had been silenced. Her voice meant nothing, which led her to believe she also meant nothing. 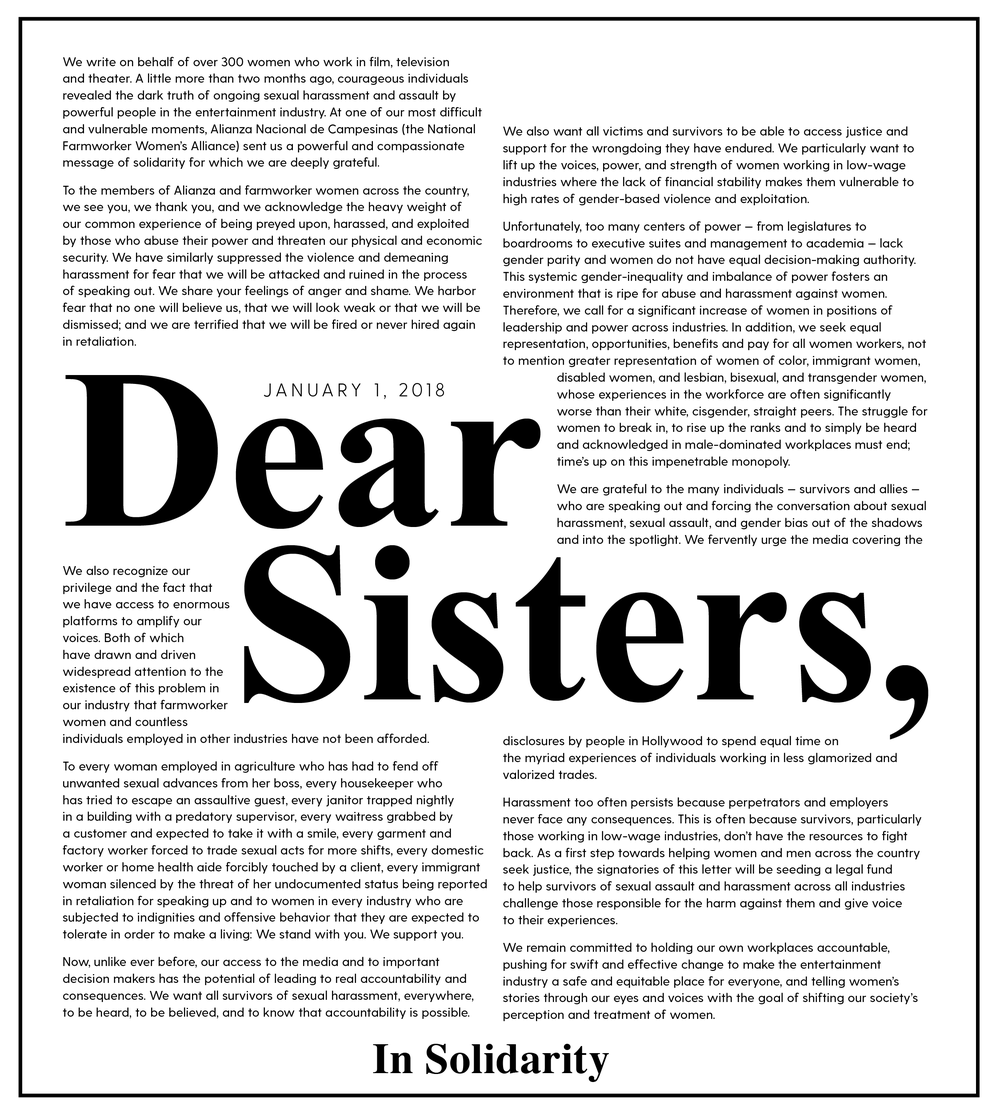 Over the last months a movement was launched: #MeToo, which came amid a national reckoning over sexual assault and harassment. Starting 2018, another step kicked off: Time’s Up, an initiative that promises to not only shake up decades of sexual harassment, pay disparity and discrimination in Hollywood, but also help women in all fields who are struggling with the same problems.

“Now, unlike ever before, our accessto the media and to important decision makers hasthe potential of leading to real accountability and consequences. We want all survivors of sexual harassment, everywhere, to be heard, to be believed and to know that accountability is possible.”

It is never right to shame the victim. If you want to help change that, here’s what you can do:

1. Don’t be part of the problem. For starters, don’t harass anyone.

2. If a person who has been harassed tells you about it, believe them. Don’t underestimate how hard it is to talk about these things.

3. If you know someone who has been harassed, connect them to resources who can help.

5. You can support those affected by sexual harassment by donating to the TIME’S UP Legal Defense Fund.

6. If you are part of an organization, look at the workforce and the leadership (management, officers, board of directors). Does it reflect the market where you operate and the world we live in?If not, ask why not and do something to move it closer to that goal.

7. Acknowledge that talent is equally distributed, but work and career opportunities are not. Mentor someone from an under-represented group in your industry. If you are in a position to do so, hire someone who can diversify the perspectives included in your organization; your team will be better and stronger for it.

8. You can vote with your wallet: in your purchasing, in your investing and in your charitable giving. Spend or give to companies and organizations who have more equitable leadership and opportunities for all. 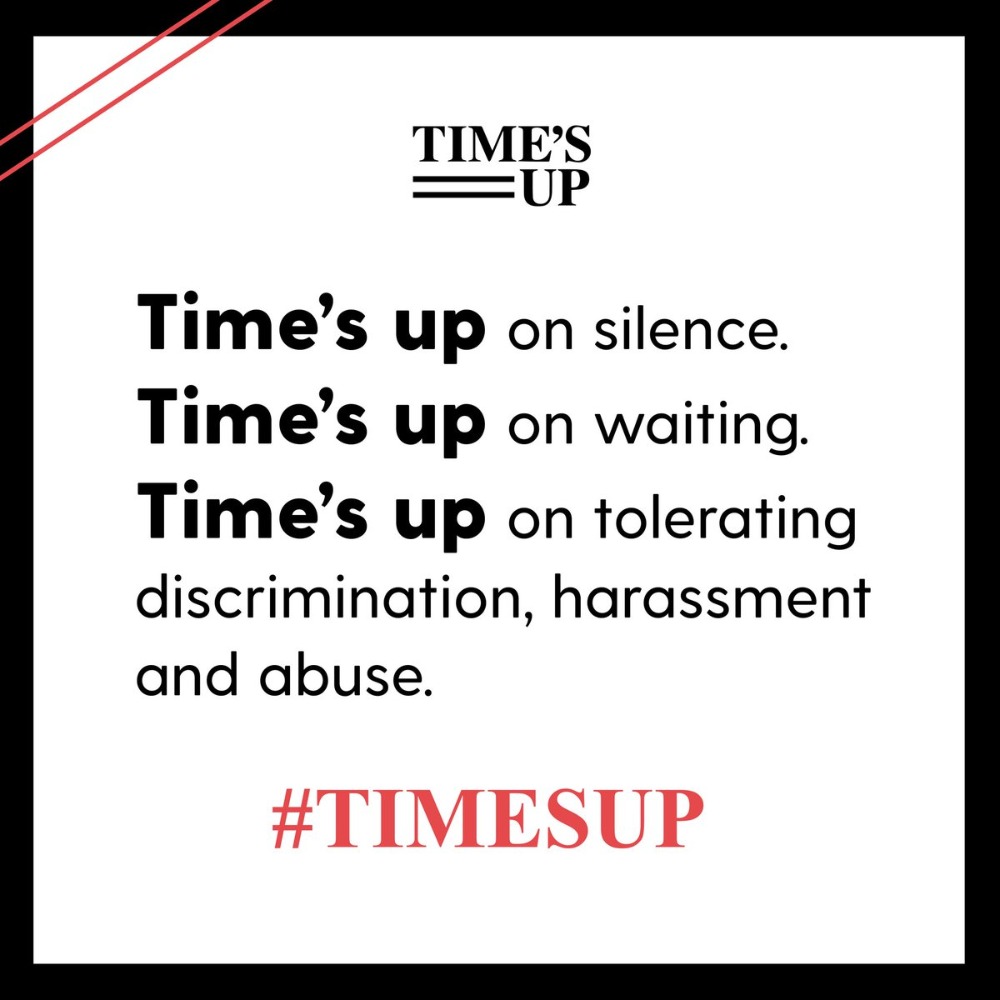 Everyday we keep making progress by taking a stand. Nothing changes if nothing changes, and that’s why Time’s Up has demonstrated thus far. Little by little, we are reducing inequalities around the world, making it a better place to live in for EVERYONE. We are changing the world, to one where no one will ever be sexually abused or harassed ever again.

No more silence. No more waiting. No more tolerance for discrimination, harassment or abuse.