The Lives We Touch

When I first met Ana, she had just arrived in Vienna after having went through the hardest journey of her life. It had taken her family almost two months to travel from rural Afghanistan, where they had lived their entire lives, to Austria. She remembered little of the desert, of the boats, of the long nights and hot days. Now that it was all over, everything blended in her mind like the sequences of a movie seen very long ago. The journey appeared to have erased everything that came before it: their old village, the young goats. The little pharmacy she used to work in. The constant fear.

Ana had come to Vienna with her three younger siblings and her parents. They seemed to hold on to each other tightly each time I saw them, as if endlessly grateful to be together safely. None of the other members of their family could read or write in Farsi, let alone speak any foreign languages. She had been their connection to the outside world back in Afghanistan, just as she was in Austria.

I met them in my third week teaching German; I had signed up to do a course with a small refugee group and I was struggling. I had come in with a prepared curriculum and set plan, but seemed to never be able to move past repeating a few words. I spent nights thinking of how much I wanted to help the people I had met. Instead, I seemed to be just a bad teacher. I didn’t see the point in being a volunteer or participating in the action since I was making no difference at all.

It took Ana to help me understand how important every action really is. In the second month of her being there, she handed me the manual we had never even opened in class. She had read it all and she wanted something else, she needed to keep learning. As I handed her the German books I always carried around, she thanked me, tearfully, for teaching her and her family how to read the Latin alphabet. It was the help they desperately needed, the foundation I never realized I was laying down. 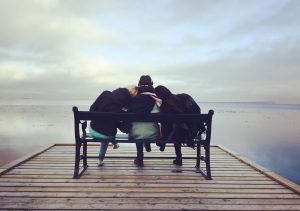 I met her almost a year after having finished working with the organization. They had gotten a place to live; she and her siblings were enrolled in school for the first time in their lives. Her parents were doing an advanced language course. Over time, I met other students, children and adults alike, randomly, on the streets of Vienna. They were rebuilding the lives they had left behind. I never knew it at the time, but the months I spent volunteering were one of the things that helped them get to where they were. Without knowing, I had helped people regain their sense of purpose.

We often neglect how much impact our actions can have in the lives of others. We fail to understand our reach or the importance of taking a step, however small, towards helping the ones around us. When it’s all said and done, we’re the ones with the power to make a difference. As Lewis Carroll said, “one of the deep secrets of life is that all that is really worth doing is what we do for others”.

Today, take a moment to think about all the ways you could help the world become a better place. Start with the lives of those around you. Start small, but start now.