Taking Responsibility: Are you a world citizen?

While I grew up, there was one question I constantly asked myself – what exactly was the bigger plan I was supposed to be part of? I knew that the world is much like a puzzle, run by different forces, with many things involved in its shaping.

Even from an early age, I’ve always considered myself to be a contributing part of it, not just a bystander. A part of all things human, of all things happening around the world. I believe some of it comes from the fact that I flagged myself to be a citizen of the world and not just a student in class, a member in my family or a person within her own corner of reality.

In far too many ways, I’ve come to realize that there is, within all of us, something that feels the same way. A voice who feels connected to the outer world by an unknown force. Maybe it’s just basic humanity to begin with. Still, it comes as a surprise that there’s a huge amount of people who feel disconnected from the rest of the world. People who tend to only focus on their own personal affairs, subdued by the sheer pressure of society to excel in areas which do not really matter in the long run. 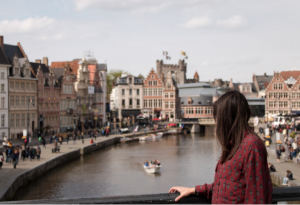 It’s true that sometimes, our problems and day to day activities are heavy and some matters, if not taken care of, slip out of our hands. It is important to deal with them, but what is essential to realize, is that it is just as important to engage with the big world that lives and breathes out there. There are issues, there are people with far worse problems than ours, which can only be sorted out when the rest of us start thinking globally.

When a person starts to enjoy taking responsibility in improving the world, in building a better planet, he/she truly becomes a citizen of value, a leader. Imagine a world filled with peace, no hatred and complete harmony. No wars to be fought, no glories in mass killing victories. Why aren’t we there already? Why are our so many people in the world still crying for help?

A planet fueled by love might seem like dream, but we believe there is someone who really has the power to build a home out of it all, and that’s us. The youth.

In a forward-moving world like ours, we must believe that this world is redeemable, as long as we continue to initiate more actions towards goals that actually make a difference. If you and I both take one step forward, there’s a million more that will follow. Let’s begin by being leaders who believe in the power of acting as world citizens and take a leap towards sustainability for all.