Remember how, back when you were a child, you used to have those nightmares that seemed so real the bitterness of them would linger come morning? Remember how no matter where you tried to hide, how fast or how far you would run, the threat would find you, time and time again? How you’d wake up and search your skin for the scars of which the pain you could still feel, running through your limbs, piercing through your brain?

What if one day you’d wake up and the nightmare would still be there? What if it would be your reality? For more than 65 million people that have been displaced by conflict and violence, it is.

There’s little less atrocious in this world than war, than the way it steals and burns all traces of culture, of humanity, of life. One of the most tragic things of all is that, when few forget about the value of the human spirit, about the beauty of peace and understanding, it’s many that have to suffer, many that have to bear the cross of a battle they never wanted.

According to the Report of the Secretary-General on the protection of civilians in conflict zones, more than 20 million people, including 1.4 million children, are on the brink of famine in Nigeria, Somalia, South Sudan and Yemen. Countries like the Democratic Republic of Congo, Iraq and Syria have been battlefields for so long, many don’t remember what life was like before the war started. It seems like centuries ago. Elders and parents and students and children lead unspeakable lives, devoid of hope and decency, burying their keen and together with them, everything they once knew about life, to surrender to the wrath of others. They leave their homes in order to look for shelter, for food, for safety. They put themselves in danger in the effort to avoid the bigger one that lurks at home. Many times, they die too. They die horrible, tormented deaths that would not be allowed on any screen.

And more often than not, we don’t pay enough attention to them. We don’t completely grasp the horror they must go through or at the very least, we don’t like to think about it. We don’t concentrate enough efforts towards putting an end to it. 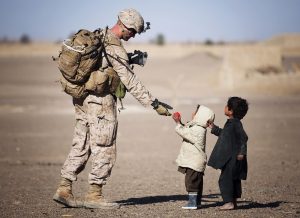 This year, in order to help shine a light on the ordeal people in war zones all around the world have to face every single day, the UN has declared the World Humanitarian Day on the 19th of August 2017 as being dedicated to the aid of civilians affected by conflict and persecution. The tagline of the campaign launched before the event, #NotATarget, is meant to remind everyone that many times, civilians are the true victims of battle, that they deserve to lead their lives in peace and safety, without a constant target on their backs. The accompanying data in the report of the UN Secretary-General provides information, guidelines and commitment calls that aim to better define the purpose of the event.

The power of change lies in unity, in the combined efforts of men and women who know that it’s up to them to make a difference in how our world looks like. When it comes to war, now, more than ever before, we must be able to evolve together in order to provide a safe, decent and empowering environment to every single person on the planet. The fate of humanity will be decided by us and what we’ll build. It’s time to get to work.