It's Never Too Late

Take a minute to think about the last time you made a mistake. Remember how angry you felt, at yourself and at the world? How bitter it was that even though you tried again, even though you put yourself out there yet again, you ended up taking the wrong path?

Most importantly, do you remember how final it felt, like the end of a very poorly written story? How you thought that it was the last drop to an already overflowing glass and no matter what you do from then on, you will never be able to undo it?

It often seems like it, doesn’t it? Like our missteps are the defining elements in our lives and once they happen, we can never move on from them. Like we’ll never be able to start anew and feel light again.

Thing is, you can. And you will.

It’s not always easy to rebuild what broke or to have the confidence to decide that you’re not living the life you wish for, so that you can start from scratch. But you are strong enough to do it, and you’ll get up more times than you’ll ever think you’re capable of. This world is nothing if not full of new beginnings and chances to take, so it’s you who must choose what you want out of it and if you’re willing to put in the work. You’ll stumble, fall, and then do it all over again and you know what? You’ll wake up another day and by doing that, you’ll have a chance to start over, to stir the ship in any direction you want and just like that, to become whoever it is you want to be, whatever your past. 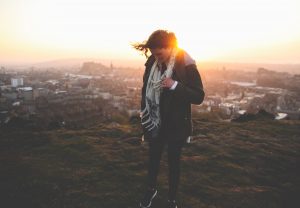 If there’s one thing you have to remember, it’s that it’s not too late. It’s never too late to get up, to change it up, to take the jump and run and start all over again. You’re not stuck and you’re not ever defined by single snippets of your experience. You’ll do it again and you’ll do it better. However final it might seem, however tired or sick of it you might be in the moment, it’s not the end and it won’t ever be, as long as you don’t let it. As long as you keep going forward.

The beauty of life lies not in its definitiveness, but in the fact that whoever you are and wherever it is that you’re going, you get not one, not two, but hundreds of chances to begin again, to love and to screw up and to just live to the fullest. It starts each year, each week, each single morning. And it’s up to you to take it.