100 Balls or The Happiest Day of My Life

The wait is over, and we’re very happy to finally be able to share with you the results of the Top Writers Challenge: a beautiful collection of stories that highlight the impact leadership can have in our lives and what it can do for the world. Below, check out Cosimo Scarano‘s story, of AIESEC in Italy, and his transforming experience in Brazil.

This is a story that starts from the end, the last day of my Global Volunteer project with AIESEC, in the city of Recife, northern Brazil.

During the wonderful experience I had down there, in a school with more than 100 children, to teach about cultural diversity and human rights, I got to know a wonderful little boy named Gustavo: dark eyes, brown hair, eight years old and a shy smile on his face since the very first time I entered the class room.

Weeks passed, me and Gustavo became like brothers. He looked just like I did at his age in such an impressive way, that when I showed his picture to my mother back in Italy, she was shocked and said: “Thank God your father has never been to Brazil, because if he had been… then he would be in big trouble!” Every day he was welcoming me at the entrance of the school, just to walk by my side the few meters through the door of his classroom.

“What are you going to teach us today?”, this was his most frequent question, and week after week it also became the question that I asked myself the most. What was I teaching to them? Which was my role in their lives?

I could spend hours talking, or maybe write a whole book listing and discussing all the things that I learned about the environment these children were living in, and the extremely difficult situations they had at home: parents killed, brothers in prison, drugs everywhere, violence filling every moment of their young lives.

But this one time, I just want to avoid talking about the sad side, and rather spread a little ray of hope, and happiness, just as I tried to do in this episode I am sharing with you.

It was one of the last days of my exchange in Recife and it happened to be -what a coincidence- the birthday of my newly little brother Gustavo. I spent the whole week wondering what I could give to him as a present: obviously not something too expensive, to not look like the rich guy trying to show off in such a difficult context, but of course I wanted it to be something special to him, something that could remind him of me even after I was gone. And then, while I was watching the class playing soccer in the hard court, the solution came to my mind: “a new ball, that’s perfect!”.

So, after work, I went to the supermarket and found this beautifully colored ball and bought it to give to him as a birthday present.

The day after, I arrived at school earlier and delivered the special gift, packed, to the smiling boy: when he opened it, I saw full joy spreading all over his face, as he started jumping while holding his ball, then hugging me repeatedly saying a word that sometimes seems so empty and meaningless to us: “Thank you.” 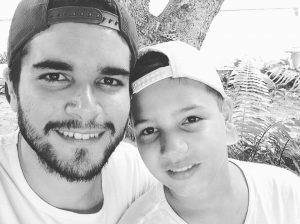 Later the same day, Gustavo spent the whole lesson grabbing his ball, crazily waiting for the break time to come so he could go show his present to his friends and play with them on the field. When the time finally came, he literally flew out of the classroom.

I stayed there, talking with the teacher about how the AIESEC experience was changing me as a human being and all my core values, when a kid entered the room and started staring at me.

“When will I receive my ball?”, he suddenly asked.

Then a second boy arrived. And a third one. And in a few minutes there were children everywhere asking for their presents. It was when I realized the big, and horrible mistake I had made. How could I be so blind? What kind of stupid does something like that, giving a little kid a present that would be noticed by a hundred more?

Just imagine how embarrassed I was and how sorry I felt in that moment. Thinking about it nowadays, I can say that was the moment when I learned one of the biggest lessons of my life. Actually, two fundamental learnings:

1. Always think about consequences before doing anything;

2. You can do incredible things. Yes, you.

Why do I say this? Because while all those kids were looking at me waiting for something, and I was experiencing the true meaning of feeling guilty, I decided that it wasn’t the moment to stop, or to regret.

“Kids”, I said, “I don’t have enough time, and money, to buy a ball for all of you. But I promise…believe me…I will come back. And each one of you will receive his ball. I swear.”

One week after, after heavily crying during my flight back to Italy, the words were stuck in my head, my throat, as I kept thinking of those children’s faces and smiles.

It took 5 months to come back to Brazil: I got my degree in Finance, finished writing my book and sent it to some editors. I realized that the best way to spend some free months while waiting for their answer was to go back to where I felt alive for the first time in my existence. But I couldn’t arrive there with nothing in my hand.

Since a promise is always a promise, I posted the story of Gustavo and his present on my Facebook wall, remarking how cheap the ball -less than 5 euros- was and how happy he was after I gave it to him.

Surprisingly – or maybe not – people started messaging me asking for a way to contribute to the childrens’ happiness. “I want to make a donation! I want a child to receive a ball from me, even if I will not be there.” That was the spirit that supported the fundraising I started, due to the booming of donation requests. At one point, even strangers were stopping me on the street in my hometown and putting money in my hands: what kind of beautiful and unbelievable feeling of trust was that?

In just two weeks before my departure I collected 800 euros. Hard to believe even for me. So the day after arriving in Brazil, I went to the supermarket and felt a bit ridiculous while asking to the salesperson: “Do you have 150 balls?”. Initially, he looked at me thinking I was totally insane. Then understood there was no joke and called his boss. Two hours later I was going out of that place with 2 cars full of balls. 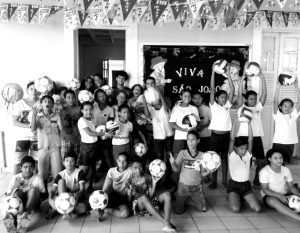 It may seem like a movie story, and I would have thought the same a few months before this story happened. It’s difficult to explain in words, so if you really want to see it like a movie, imagine the final scene: I arrived at school and the children started hugging me, already happy just because I was there again; then I started giving them the balls I had with me and they simply couldn’t believe it.

“Is this for me? Really? Can I take this home with me? Do I have to pay something?”. My heart just broke seeing their tears, the way they went crazy about their present, the loud happiness while starting to play in the middle of the building, kicking balls everywhere.

In case you want to know, that was the best day of my life, making more than one hundred children happier than ever before.

The nuns that run the school were not as happy as the rest of us, but this is another story, that I will tell you some day…